Debate Success: a Modicum of Passion, a Few Spare Hours, and an (Optional) Blazer 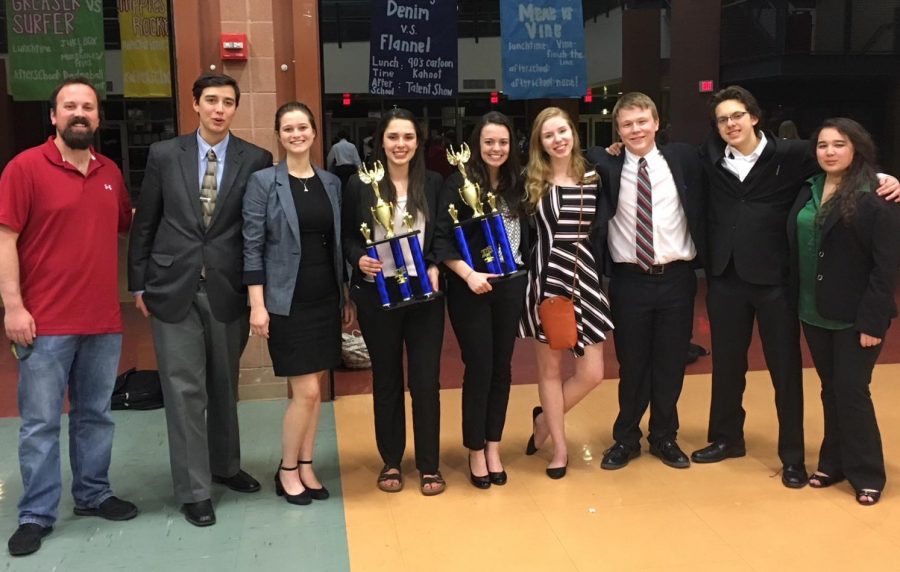 Mr. Monsey and the Debate Team pose in Las Vegas at the State Tournament on March 17, 2018.

Debates and arguments are staples in a majority of people’s lives. Whether offering an opinion about the strengths or weaknesses of a presidential candidate or simply arguing why a favorite football team is the best, debates lead people out of their comfort zones to prove their points.  Some people at Bishop Manogue do this competitively by taking an active role on the Manogue Debate team. A competitive debate is an argument with rules. Debates can have different formats, including single-member teams or teams with a multitude of students, which can alter the strategies needed to win the argument. Commonly, in a formal debate, the students have no prior knowledge of the topic about which they must argue. This requires that they collaborate, discuss and develop their “side” of an argument in a relatively short amount of time. Teams compete with one side arguing “for” and the other arguing “against”. A panel of judges awards points for how well each side meets particular criteria such as, “organization and clarity, use of argument, use of cross-examination and rebuttal, and presentation style” (http://www.csun.edu). Meeting these  demands requires participants to “synthesize information, insights and rhetoric into cohesive arguments,” explains Debate team adviser, Mr. Monsey. He also adds that having “a natural ability to react in the moment… [by] thinking on your feet is another vital skill,” that should not be discounted.

Bishop Manogue’s Debate “team” is actually a school club, not a class for credit, which means students are required to research, prepare and perform – all on their own time. Monsey, concedes that “we would see more consistent participation” if this were offered as a class. However, the students who do join, do so “on top of their already extensive workloads….I am amazed at the amount of work students do to prepare for events…[and] impressed by and incredibly proud of the members of our team.” This school year, the team is focused on collaboration and has “emphasized teamwork in preparing for events,” says Monsey; and 2 standouts of impressive teamwork are senior debate partners, Gabby Kapitz and Sarah Cherry, who have the unique experience of being teammates since freshman year. But in the beginning, it was not always smooth sailing.

Gabby primarily joined the debate team “because I’m a contrarian and love to argue. I also wanted to improve my speaking, writing, and argumentation skills and find a community that would challenge me.” Sarah joined because of her parents’ encouragement. Active in debate for the last 4 years, Gabby and Sarah have developed a very special and cohesive partnership (even dressing in matching blazers for the first couple of debate years) despite their glaring differences. “We are polar opposites, but compliment each other. We fought at first…but we have become really close friends,” shares Gabby, adding, “We know each other’s strengths and weaknesses and compensate accordingly.” Sarah agrees that “having dissimilar perspectives has helped us a lot in debate…[and] 2 thinkers are better than one.” Interestingly, their

contradictory points of view have been the catalysts that work for, not against them, as teammates. Monsey states that, “These 2 have found a style and an approach to preparation that gives them an advantage.” They perfect their style with thorough affirmative and negative topic research, writing and preparing evidence. Gabby shares that, “You can prepare as much or as little as you want for a tournament, but it is a safe assumption that your competitors will be well-versed.”  They have definitely turned their differences in technique (and what could have been an insurmountable roadblock) into a team-building success.

Deciding to join competitive debate may seem intimidating, but Monsey assures students that it is not as daunting as it may seem. “I would argue that this program is the safest place to develop a skill set that so many people badly want and need later in life.” He elaborates that “if students participate in speech and debate for any amount of time, they gain invaluable experience that they can carry forward into all areas of life.” If you want to learn more about the debate team, feel free to talk with Mr. Monsey. Sarah encourages anyone to “Just try it out!”; and Gabby shares 3 basics: “All you need to get started is a modicum of passion, a [few] weekly spare hours, and a blazer (and the last 2 are really optional).”

Most recently, on March 16-18, the Manogue Speech and Debate team traveled to Las Vegas for the state tournament. All 8 competitors showed great teamwork and determination. In addition, Sarah Cherry and Gabby Kapitz took 3rd place in their event out of a field of 44 teams! The team competes in the National Tournament,  their last competition of the year, on March 24-25. Congratulations to the entire talented and dedicated group for their impressive work!