Swinging Through Another Season of Miner Tennis! 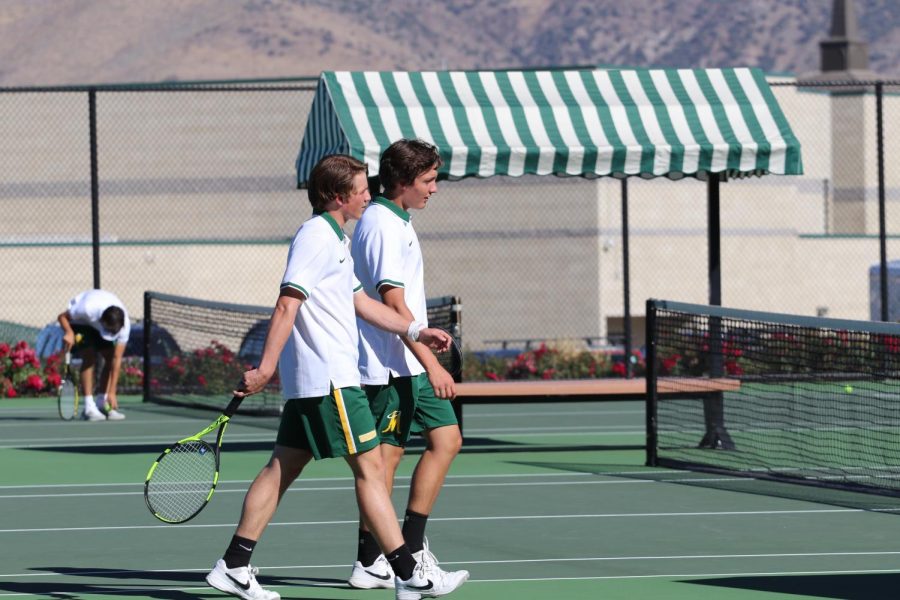 The tennis team at Bishop Manogue has been known to be a very proficient group of hardworking athletes that consistently improve their form and game to perform at the absolute apex of their ability for competitive games. I played on the varsity men’s team my freshmen and sophomore years, and I can say with absolute confidence that my participation on the team has greatly improved my overall performance as a tennis player. Despite my attendance on the team, I decided to take a step back from my viewpoint of the tennis season and its effects on my performance and interview a teammate of mine about his outlook of what the season has done for him.

Many tennis professionals and experienced coaches believe that tennis is much more of a mental game than a physical game. While, yes, a talented player might be obviously running around the court at high speeds and returning the ball with all of the force their arm can muster, their brain is what is controlling all of it, and how they react to a serve or a hit on their side within a split second can change the course of the entire game. My doubles partner, John Althoff, explained that, “it’s easy to get frustrated if something isn’t going your way, but having the mental endurance to continue on and persevere through a hard game is the key to being a good player, no matter how good your strokes and physical capabilities may be.” Despite our team’s own experiences with this tough but brutally honest fact, we pulled through the season with exemplary performance and placed third in the rankings out of all of the division one high schools in Reno.

In tennis, there are a plethora of moving parts and varying movements one must master in order to get the ball over the net in a fast and unpredictable way. Whether a player has a good serve, return, approach shot, volley, or overhead, none of those different shots matter as long as they can all work together. At times, it can be difficult to work with a partner in tennis due to the high chances of one player’s style and execution sequences being vastly different than their partner’s. Despite this, Althoff, being a doubles player, mentioned that, “I had a fun experience playing with my partner, because it often felt like we didn’t always have to take what we were doing with absolute seriousness, but it also felt like we could win games and hard points because of how well we worked together as a cohesive bond.” This behavior was the exact element that brought Manogue to a high seed for regionals; again, proving how much tennis relies on the mental aspect of one’s overall performance.

The Bishop Manogue tennis team improved greatly from day one of the 2018 season, and we expect to see similar, if not better performance next year from the men’s (and women’s) tennis teams. This year, we bonded as a group and all worked together to perform at the best of our ability as a close-knit unit of athletes. From the whole team, we want to thank our coaches, John Matkulak, Bobby Unsworth, and Jason Yelley for a great season. See you next year!