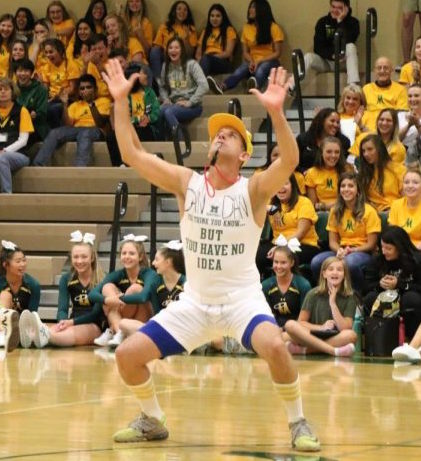 Dan Dan the Man Man performing for Manogue at the Welcome Back Rally in August. Photo courtesy of the Bishop Manogue Yearbook Staff.

Mr. Kelly, more commonly known as Dan Dan the Man Man, is bringing new energy and spirit to Manogue in his first year on the Miner teaching staff. He is striving “to show all [his] students the beauty of Catholicism” through his excitement for the faith and his enthusiastic teaching style. For the past six years, Kelly has been a youth minister and a basketball coach in Incline, with experience before that teaching religion in Southern California. Additionally, being a Kairos director at his last school, he sees the “value in getting away together, changing the way [students] speak about their faith, [and] their journey as a young Catholic.” It is one of his main goals to make Quest and Kairos retreats available to every student at Manogue.

Away from school, he and his wife are Young Life leaders which is a Christian outreach program that brings the faith to kids who have not heard of Jesus before. The “club” meets every Monday at the Kelly’s house and attend two retreats a year in the winter and summer. It was at one of these retreats where Kelly adopted the character Dan Dan the Man Man and willing to “completely embarrass himself in front of high schoolers” agreed to bring Dan Dan the Man Man to Manogue at leadership’s request.

Kelly is from Northern Nevada and grew up in Incline. He went to Pacific Lutheran University in Washington to play college basketball where he majored in communication, television, broadcast, and journalism with his end goal to be on ESPN. However life took him another way, first to professional basketball in Australia, college coaching in Southern California, and finally to religious teaching. Originally, he began teaching as a favor but humbly shares that he is “really good with young people on a basketball court and in a classroom” and ultimately found his calling.

Kelly’s main hobbies outside of school are surfing, skiing, and his family. One of the biggest reasons he took the job at Manogue was  to “streamline” his life to be with his family. He has three kids, an eight-year-old named John Michael, a six-year-old named Anabelle, and a three-year-old named Monica who take up most of his free time. Kelly loves the “environment” Catholic schools create and is excited to be a part of the Manogue family.