The Miner Detail • May 28, 2019 • https://minerdetail.bishopmanogue.org/7123/sports/legendary-season-for-manogue-girls-lacrosse/ 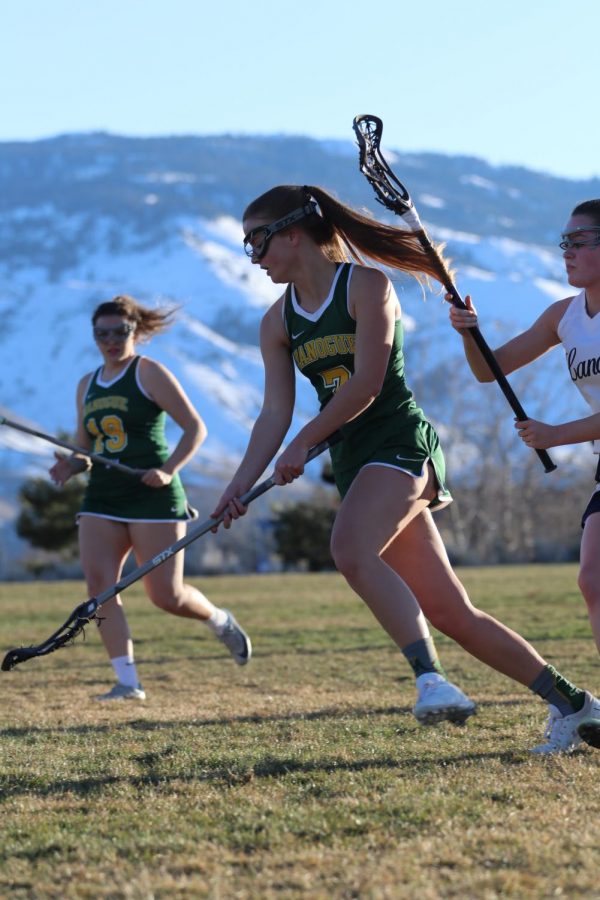 Mariclaire Geil, defensive player for the Manogue girls lacrosse team, describes their 2019 season in one word as “legendary.”  During the beginning of the season Geil explains that an early defeat of Truckee High School brought the team up in ranking and “excited the team about their potential for success in the season.”  The team beat Fallon, Truckee, and Galena three games in a row to achieve the regional title for the first time in Manogue history. Geil says that the core group of seniors fostered a strong team camaraderie (Margaret Peet, Jada Brown, Maddie Allen, Zoey McCullough, Addy McDermott, Maelia Johnson) that “led the team to a successful season.”

Geil says the team this year was much larger than past years, mostly because “a lot of girls were interested in trying out lacrosse as a new sport” and during that initial period, the girls “had to develop trust and work together as a team to achieve a strong bond.” The team was doing exceptionally, with an undefeated record, when they headed into a midseason match against Galena, which has historically been “unbeatable,” according to McCullough.  Geil explains that “we were up in the first half, and lost the lead until we were tied at the end. Then we went into overtime, and Galena scored the first goal, ending the game.” Geil recalls that “we knew we could beat them, and this gave us a stronger motivation to keep working hard.” The team sought revenge when they met Galena for a rematch before playoffs and went into overtime again, beating them with a score of 8-7. “This excited us going into playoffs, beating Galena for the first time ever,” explains Geil. Eventually the team made it to the regional championships after beating Truckee 10-4 in the first round of playoffs.  At first, Geil describes the game as “pretty even,” and Fallon’s accumulation of yellow cards led to an advantage for the Miners, and they ultimately defeated the Greenwave 11-7.

The team ended the season with a hard-fought loss to Coronado. Some key players on the team were Brynn Gallagher, Jada Brown, Addy Mcdermott, Ellen Bayliss, Mariclaire Geil, Riley Skogerson, Zoey McCullough, and Julia Kip. McCullough explains her favorite memory of lacrosse this season was “the tight-knit community of players we have on this team, and how we support and build each other up.” McDermott explains that her favorite memory is “beating Oasis in the regional championship to make it to the state championship.”  Geil explains that her favorite memory was “beating Galena for the first time ever.”

Lacrosse at Manogue is a club sport, which brings some difficulties, such as not having priority over the field and not as many financial benefits, but with the increasing popularity of the sport of lacrosse in Northern Nevada, it may transition out of club programs and into school programs soon. Despite the loss of eleven seniors who are members of the graduation Class of 2019, most of them starters, such as team captains Ellen Bayliss, Jada Brown, and Zoey McCullough, the underclassmen are looking forward to a strong season next year. After a great season this year, the team hopes to continue their success into next season with another appearance at the State Championships.