The Miner Detail • May 28, 2019 • https://minerdetail.bishopmanogue.org/7128/features/service-from-the-sierras-to-the-himalayas/

Service from the Sierras to the Himalayas 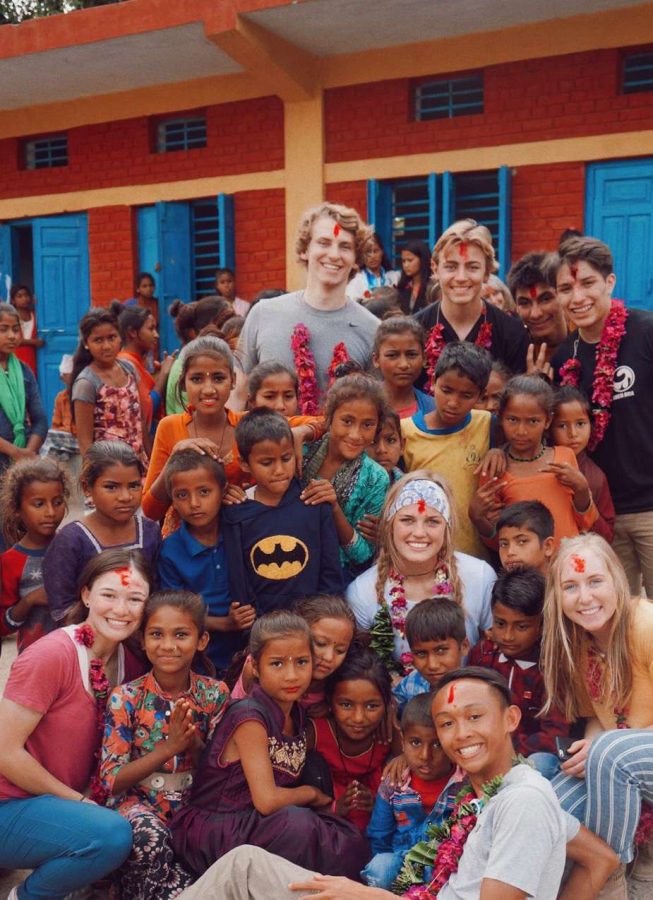 The buildOn trip to Nepal over Spring Break 2019. Photo courtesy of Jeffrey Arao.

During Spring Break this year, while plenty of Manogue students travelled to San Diego or Mexico to enjoy the sunshine and the beach, several Manogue students, as part of the buildOn team, travelled 7,512 miles across the planet to Kathmandu, Nepal to build schools.  buildOn works closely with rural communities across Nepal to ensure they have access to quality classrooms and education. Discrimination based on gender and the caste system have excluded many children and adults in Nepal from ever attending school. buildOn’s School Construction, Enroll, and Adult Literacy Programs are working to give children and adults denied the right to education access to classroom learning, and through buildOn’s school programs, like Manogue’s. With primary schools that are gender-equal and Adult Literacy courses that cover health, literacy, and community development, buildOn schools are creating a better future for students and their entire villages. Over Spring Break, the buildOn team of Manogue travelled to Kathmandu for ten days.

Kathmandu is the capital of Nepal, which is a small country of 29 million people situated on top of the world. Wedged between the mega-countries of China and India, Nepal is home to eight out of the ten highest mountains in the world, including Mount Everest. The mountainous terrain of the land-locked country presents tremendous challenges for socioeconomic development and makes it difficult and costly to expand Nepal’s infrastructure. In 2015, Nepal remained one of the least developed countries in Asia and ranked 144th out of 188 countries in the UN Human Development Index.  According to the Asian Development Bank, about 25 percent of the population existed on less than USD $1 per day in 2010/11.

According to World Education News and Review, further impeding socioeconomic development is Nepal’s susceptibility to earthquakes. In 2015, the country was struck by two consecutive earthquakes, one of them the strongest quake in more than 80 years. This catastrophic event killed more than 8,600 people and destroyed or severely damaged large parts of the country’s infrastructure, including almost 500,000 houses and more than 9,300 schools.  Hundreds of thousands of families were displaced, and more than 700,000 people pushed into poverty as a result of the catastrophe. The impact on the education system was disastrous, and recovery is progressing slowly. One year after the quake, more than 70 percent of affected people in the hardest hit areas still lived in temporary shelters. Many children had to be instructed in makeshift tents, resulting in a noticeable increase in dropout and grade repetition rates, leading to more obstacles in the path of children who are in dire need of adequate education.

“The goal of this trip,” explains junior Emma King, “was to go and build a school for an underprivileged community, but it ended up being much more than that.  We spent five days in the village, which was called Motiyaphata.” King says that she wanted to go to Nepal because she wanted to be a part of something greater than herself.  “I wanted to share the beautiful gift of education with children who aren’t as privileged as most American children,” she says. “I wanted to step out of my comfort zone and experience a culture that was drastically different from my own.”

The Nepalese culture was, in fact, drastically different from these students’ lifestyles in America. Each Manogue student raised a total of $5,000, which King says, “took a while.” Most students created GoFundMe pages and gained most of their money through this method.  Some students sent letters to businesses and told them about their planned journey, asking them to donate and help them on their mission. In the days leading up to the trip, students had to pack a lot of loose clothing which would be acceptable on the trip. “The buildOn team also gave us some language lessons and hand gestures we could use to communicate with the people of Nepal,” explains King.

“We learned about their eating habits, and how they eat meals on the ground and offer gracious amounts of food.” Sophomore Hannah Hirsch explained that in the days preceding the trip she was full of nervousness and excitement. She had never travelled this far for a trip before, and she was “nervous about living with a host family.” King explains that the most challenging part of the trip was the “close living quarters” and “the heat.”  She states that it was often difficult to fall asleep because of how hot it was. “I shared a room with two other girls, so it was sometimes hard to find all of our belongings because we could barely move without bumping into the cots or each other,” she says. King says that her favorite memory of the trip was when they were working on building part of the school, and “this woman started to say something to me in Nepali. The translator came over, and relayed the woman’s message to me.  She said. ‘I hope you live a long life of blessings and happiness.’ This was so impactful to me,” says King, “as she was living in a poor village with barely any belongings, and she was worried about my well-being and happiness. It truly reflected her generosity and selflessness.”

In Nepal, Manogue buildOn students stayed with host families and were welcomed home with compassionate hospitality. King called her mother and father Amma and Buwa, and explains that their son’s wife and his infant child lived in the house as well.  Additionally, their daughter and her two children lived there. “There was barely enough room for them already, so the fact that they have up a room for me and my roommates was truly amazing,” says King. Jeffrey Arao, a sophomore at Manogue, explains that he stayed with a big host family of about eight people, “ranging from toddlers to the elderly.” Arao’s favorite memory was the Happy Holi festival, which is a religious celebration. Holi celebrations start on the night before Holi with a Holika Dahan, where people gather, perform religious rituals in front of the bonfire, and pray that their internal evil be destroyed the way Holika, the sister of the demon king Hiranyakashipu, was killed in the fire. The next morning is celebrated as Rangwali Holi – a free-for-all festival of colors, where people smear each other with colors and drench each other. Water guns and water-filled balloons are also used to play and color each other.

Anyone and everyone is fair game, friend or stranger, rich or poor, man or woman, children and elders. The frolic and fight with colors occurs in the open streets, open parks, outside temples and buildings. Groups carry drums and other musical instruments, go from place to place, sing and dance. People visit family, friends and foes to throw colored powders on each other, laugh and gossip, then share Holi delicacies, food and drinks.  Arao explains that his family was “ecstatic” that he was able to participate and enjoy the festival. He believes, like King, that the trip was “life-changing,” and he “learned gratitude for the amenities that we have here such as running water and paved roads.” Arao says that “the community seemed happy, even with the little that they had,” which will stick with him forever. Hirsch believes similarly to Arao that she will never forget how “content the villagers were with so little.” King explains that “sometimes we become immersed in our busy lives of school and sports,” but it was “truly refreshing to step out of my personal routine and to be able to make such an impact on a village I would never have even heard of if it wasn’t for buildOn.”