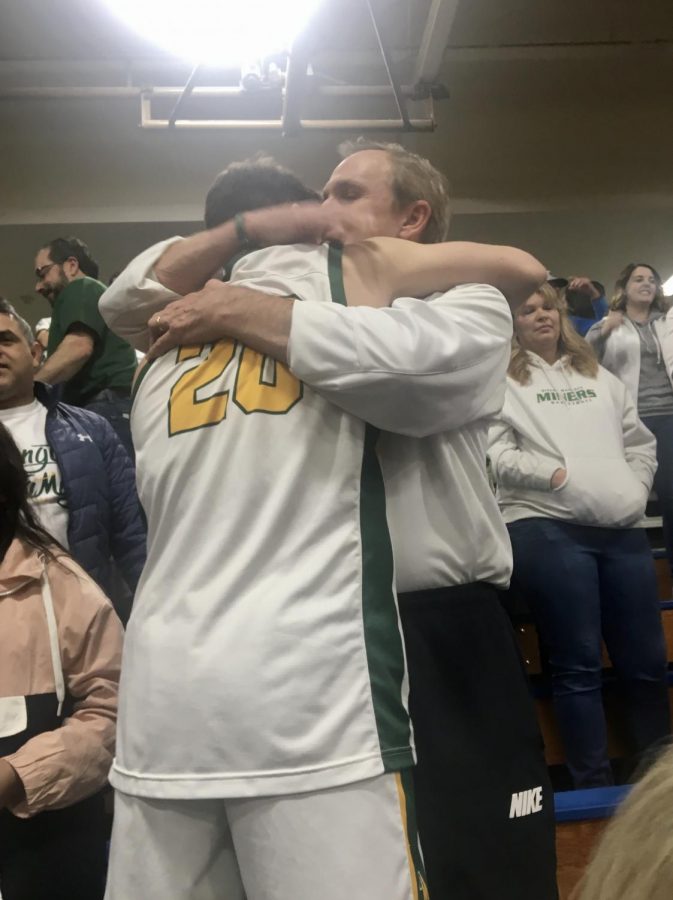 For the Ballinger/Lujan family, athletic success at Bishop Manogue is not rare. In fact, the family has tallied up a total of forty-two varsity letters so far. The legacy started in 2002 with Beau Ballinger and will continue through 2020 when his younger brother, Cort Ballinger, graduates. The seven siblings have excelled in varsity basketball, football, softball, volleyball, track, and baseball. They are also receivers of two Player of the Year awards and two Pat Monahan awards, given to one extraordinary Bishop Manogue athlete each year.

Bill Ballinger returned to the head coaching position this year, after previously leading the team to multiple Regional and State Championship victories in seasons prior. Cort says that he and his dad like to keep their relationships separate. “At home, he’s my dad and at basketball, he’s my coach. We like to keep it that way,” said Cort, although the junior basketball star calls him ‘dad’ in both environments. The Ballingers have a rule in which basketball is not talked about inside the home, and vise versa.
“My dad eats, breathes, and sleeps Manogue sports, so returning to head coach was something he was more than willing to do,” said Cort. Coach Ballinger has coached multiple players on this year’s rosters since they were young, including seniors Mateo Reviglio, Dominic Benna, and Dalton Plummer, along with his own son, junior, Cort Ballinger. He started the Reno Ballers at the Boys and Girls Club, where many of his athletes have spent years progressing in their skills.
Cort is looking forward to home games this season, most of which are scheduled for the second half of the season. Home games at Manogue are known to be exciting, loud environments with rowdy fans and intense matchups. He says the team dynamic will set them apart this year, as Coach Ballinger usually runs a tougher defense than most teams. To add to that, Cort led the state in steals per game last season. “We’ve taken defense to a whole different level. Dom, Dalton, and Teo are great defenders and we get up and down the floor quickly,” added Cort.

Coach Ballinger motivates Cort in all aspects of life. Cort says his dad pushes him to be a better person at home, and a better teammate at basketball. “That’s just who he is. He’s a really good coach and an even better dad,” said Cort. His father’s experience at Bishop Manogue truly sets him apart. He knows his players better than anyone and he spends as much time with them as many of their own fathers do.

The Ballinger family is truly a legacy at Bishop Manogue, and this upcoming basketball season is sure to add to it. As a junior, Cort is more than ready to lead his team to another successful season and to make memories with some of his best friends for the last time. Stay tuned for upcoming game times and locations for the 2019-2020 boy’s basketball season.