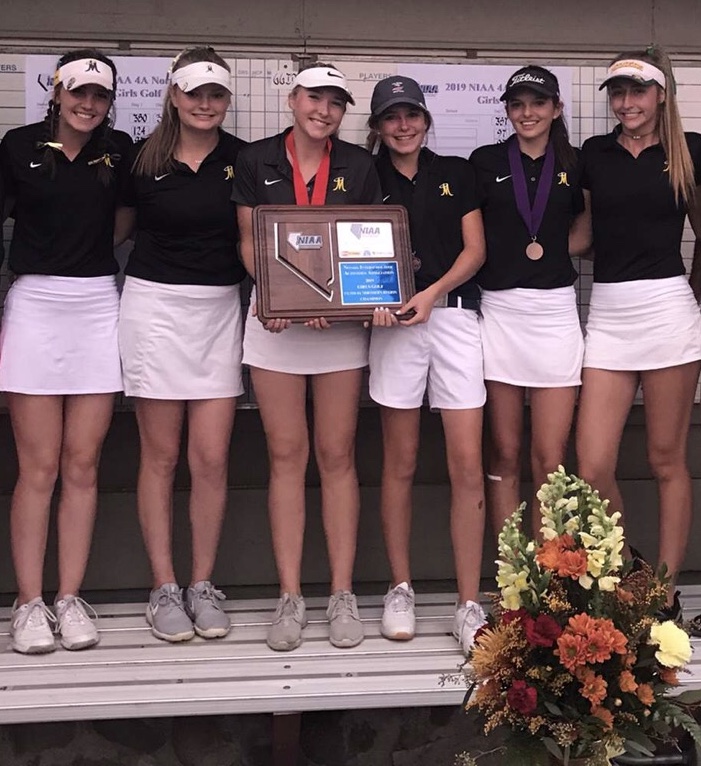 Golf, to say the least, is not the most popular sport in high school – or at any level. Most people think of it as boring or pointless, and don’t find much interest in it. However, the Bishop Manogue girls’ golf team, the top six consisting of senior Amelia Gladys, juniors Jordyn Jensen and Morgan Tisdale, and sophomores Audrey Brust, Ella Williams, and Claire McQuone, has exceeded all expectations in their 2019 season while dealing with adversity and bumps in the road. At the beginning of the season, the girls started off strong with their first win at Genoa Lakes Golf Course, defeating the second place team by more than 40 strokes. Team captain and senior Amelia Gladys stated at the beginning of the season, to keep up their winning streak “we need to focus on short game, I think we overlook how much it can affect our scores.” Gladys has been on the Manogue golf team since her freshman year, and she claims that this year is by far her favorite. “Since its my senior season, I want to have a scoring average in the 70’s and make the most of every practice and tournament with the team,” she explains.

During the first half of the season, however, the girls went through their fair share of adversity. “We lost a teammate that played a pretty big role on our team…it was rough because the first tournament we played without her, another one of our better players got sick and couldn’t finish the round,” junior Jordyn Jensen explains. “We were worried we were going to lose the tournament, but we picked it up on the back nine and kept our scores low enough to win.” The lady miners went through their season undefeated, and went to the Northern Regional Championship to win by 75 strokes, setting a new record for Manogue Girls Golf. The top six individual scores consisted of three Miners, sophomore Ella Williams in sixth, sophomore Audrey Brust in fourth, and senior Amelia Gladys in second.

The girls then continued on to the State tournament in Las Vegas to play at TPC (Tournament Players Course) Summerlin. Placing fifth in the tournament to end their season, sophomore Audrey Brust is already looking forward to the future of the Manogue girls’ golf team. As a 70’s – average golfer, Brust is excited to lead the team into two more years of success. “I plan on getting the underclassmen really involved and determined to play their best golf … the last four spots on our tournament team really set us apart from the other schools that only have two or three low scorers, and those are the ones that can be the difference between winning and losing.” The Lady Miners’ only senior, Amelia Gladys, will be coming back in the 2020 season as a team manager to help the team along in another promising year.