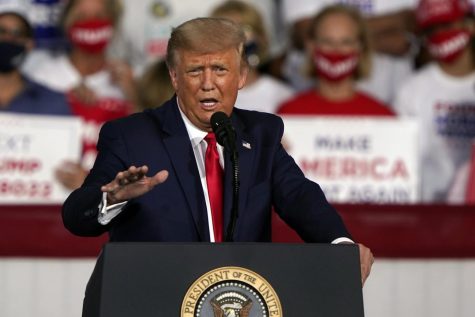 thousands of supporters, upholding his first Trump Rally in three months. It was held in the Xtreme Manufacturing building, Minden, Nevada. His supporters were ecstatic to see the President in person and cheers flew throughout the room. However, many Nevadans were concerned that the President was disregarding Governor Sisolak’s state restrictions, prohibiting gatherings of 50 or more individuals at once.

President Donald Trump had initially planned to hold his rally at Reno-Tahoe Airport, selling out every ticket available in a matter of days. The President came to Reno in hopes to convert this blue state in voting red for Donald Trump’s election. Democratic Governor of Nevada, Steve Sisolak, canceled Trump’s Rally because it violated his Covid-19 regulations. Defyingly, Donald Trump and his advisors moved the rally to be held at Henderson, Nevada. Sisolak responded saying, “He didn’t have the guts to make tough choices, He left that to governors and the states. Now he’s decided he doesn’t have to respect our state’s laws. As usual, he doesn’t believe the rules apply to him.”

Though conflict arose with state regulations, Trump’s event was a partial success. His supporters roared in excitement hearing the changes Trump wants to see in this country. Trump stressed the importance of our Police Officials and states that he stands for “all races”. He claims that prior to the pandemic, minorities had the lowest unemployment rates the country has ever seen. He then continued to degrade his running mate Joe Biden, pointing out how Joe Biden constantly changes his mind to please the polls saying, “Joe calls for abolishing cash bail and closing your prisons. He wants to close prisons, and he even called law enforcement the enemy recently. You saw that? The enemy, until his polls started dropping. Then all of a sudden, he said, “No, we love law enforcement.” It was obvious the crowd sided with President Donald Trump that Sunday afternoon, but Nevadans still wonder if this rally was truly enough to win 6 more points to the electoral college which could allow Donald Trump to be one step closer to winning the upcoming election.